There is a really good overview of the difference between this new version and the last over at Real Climate, but I had to laugh when Steve Goddard posted today;

It strongly insinuates skulduggery because the Met Office had previously predicted that 2010 would be the hottest year on record, where up to that point in the HadCRUT V3 1998 was considered the hottest. And indeed Version 4 shows two years slightly higher than 1998, 2005 and 2010 draw, but all three years are within the error margins - there is really nothing to choose between them. There really wasn't anything to choose between them with Version 3 either but this update is enough to get Goddard's conspiracy juices flowing. 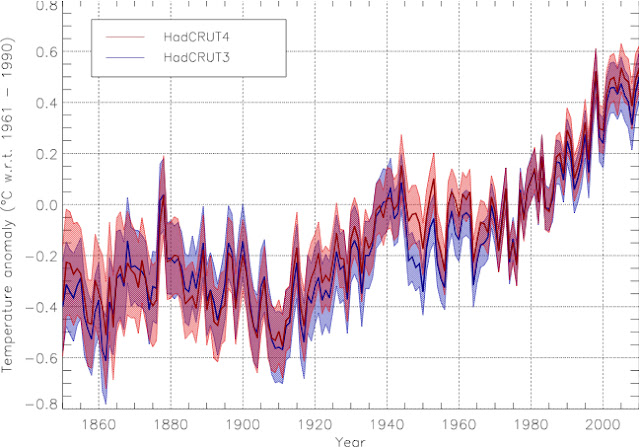 But the reason why his nonsense is so amusing this time is that in the Real Climate post three days ago Gavin Schmidt says;

"We can look forward to any number of contrarians making before and after plots of the data and insinuating that something underhand is going on. Most of the time, they will never link to the papers that explain the differences. (This is an easy call because they do the same thing with GISTEMP all the time)."