What Hansen et al got right decades ago.

Dr James Hansen gave a recent TED talk; ‘Why I must speak out about climate change’. Hansen like many scientists is not a natural orator. He comes across as quiet, dry and even shy and nervous, hiding under a hat and referring to his notes constantly.

Having said that, his talk is worth every minute it took to watch, he gives an overview of how he went from studying planets for NASA to Earth's climate, and why he has become an environmental activist. None of that however detracts from a good overview of his work, the science, and his concerns.

He says of the paper that he and his colleagues found that; “observed warming of 0.4 C in the prior century was consistent with the greenhouse effect of increasing CO2", and they also found, “that Earth would likely warm in the 1980s, and warming would exceed the noise level of random weather by the end of the century.”

I thought I’d take a closer look at the paper because it seems almost forgotten, with most deniers concentrating on Hansen in 1988, the year of his well-known Senate testimony, which included the three scenarios that deniers try to claim were hopelessly wrong predictions. They don't seem to know or want to know the difference between a scenario and a scientific prediction.

But having looked at this 1981 paper you realise that it must have formed a core part of his work that led him to being chosen to give testimony in front of the Senate. The whole paper seems uncanny in what it suggested the climate in the next few decades and into the 21st century would look like.

The first thing to notice is that there are a lot of caveats and even some statements that some could claim are contradictory. This isn’t fudge or hedge betting but an honest summary of the uncertainties that existed in the science over thirty years ago.

The paper states some beneficial effects of increased warming; “Beneﬁcial effects of CO2 warming will include increased length of the growing season.” But with the caveats; “It is not obvious whether the world will be more or less able to feed its population. Major modiﬁcations of regional climate patterns will require efforts to readjust land use and crop characteristics and may cause large-scale human dislocations.”


All of which is either occurring or seems certain to. For example, “According to the Alaska ClimateResearch Center, Fairbanks is 2 1/2 degrees Fahrenheit warmer and 11 percent drier than it was 100 years ago. The changes have stretched the growing season from 85 days in the early 20th century to 123 days.”

And on human dislocation; “Temporary migration as an adaptive response to climate stress is already apparent in many areas. But the picture is nuanced; the ability to migrate is a function of mobility and resources (both financial and social). In other words, the people most vulnerable to climate change are not necessarily the ones most likely to migrate.”

However in 1981 the net impact is still not determined and needed further study; “Improved global climate models, reconstructions of past climate, and detailed analyses are needed before one can predict whether the net long-term impact will be beneﬁcial or detrimental.”

The papers states, “It is shown that the anthropogenic carbon dioxide warming should emerge from the noise level of natural climate variability by the end of the century, and there is a high probability of warming in the 1980’s.”

The IPCC, established in 1998, confirmed in its third assessment report in 2001 that ‘There is new and stronger evidence that most of the warming observed over the last 50 years is attributable to human activities’, and by the fourth, "warming of the climate system is unequivocal", and "most of the observed increase in global average temperatures since the mid-20th century is very likely due to the observed increase in anthropogenic greenhouse gas concentrations."

The team was also spot on about warming in the 80s and beyond. This was only a few years after the media frenzy in the 70s about a coming Ice Age and most people probably thought that was more likely even if the scientists knew better. For any climate deniers this must seem like a very lucky guess, but there is a reason why these people were picked to do research for NASA.

The paper also states; “Potential effects on climate in the 21st century include the creation of drought-prone regions in North America and central Asia as part of a shifting of climatic zones”.

It still seems that these climatic zones are still in flux, but According to the U.S. Geological Survey, the current drought in the West of North America is the worst that has occurred in the last 500 years, with water flow levels at close to half those of the drought in the dirty thirties of the previous century, and  in Asia, the United Nations Development Programme has concerns about “The return of drought conditions to Central Asia" and "possible impact on food security”

The paper states; “erosion of the West Antarctic ice sheet with a consequent worldwide rise in sea level,” confirmed in this paper from 2004;

And sea level is on a rising trend; 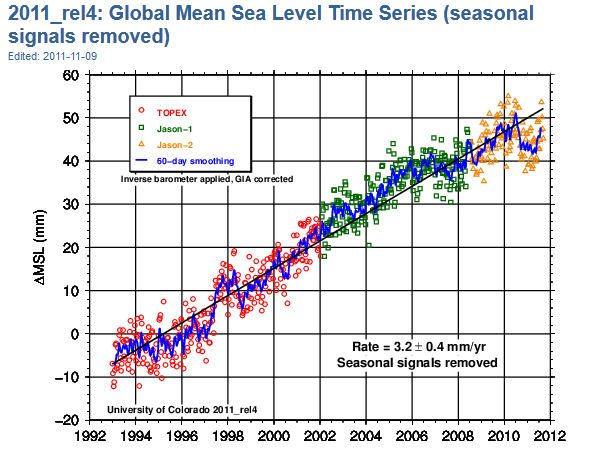 Hansen et al, predicted the “opening of the fabled Northwest Passage.” This was a hell of a call at the time. “Floating polar sea ice responds rapidly to climate change. The 5° to 10°C warming expected at high northern latitudes for doubled CO2 should open the Northwest and Northeast passages along the borders of the American and Eurasian continents. Preliminary experiments with sea ice models suggest that all the sea ice may melt in summer, but part of it would refreeze in winter”.

To most people at the time this must have been seen as alarmist. Hansen states in his recent book 'Storms of My Grandchildren', (Which the video talk seems mostly lifted from), he believes he lost some funding in 1981 from the US Energy Department because this paper was considered too alarmist. Which flies in the face of 'skeptic' claims that scientists are being deliberately alarmist just to garner funding.

But the papers prediction is exactly what has happened, with that passage and it Eastern sister are now open at least part of the time in recent summers. At least one scheduled cruise liner (the MS Bremen in 2006) has successfully run the Northwest Passage.

Even more interesting due to recent research is the claim that “Even a partially ice-free Arctic will modify neighboring continental climates.”

If the most recent research about lack of ice causing a shift to the jet stream, and making colder winters is accepted – this is another accurate prediction.

This papers also states that “Climate models predict the larger sensitivity at high latitudes and trace it to snow/ice albedo feedback and greater atmospheric stability, which magniﬁes the warming of near-surface layers. Since these mechanisms will operate even with the expected rapidity of CO2 warming, it can be anticipated that average high-latitude warming will be a few times greater than the global mean effect”.

This is exactly what has been detected with the Arctic warming several times faster than average.

And it has this to say on the worlds ice sheets;

“Melting of the world’s ice sheets is another possible effect of CO2 warming.

If they melted entirely, sea level would rise ~ 70 m. However, their natural response time is thousands of years, and it is not certain whether CO2 warming will cause the ice sheets to shrink or grow.

For example, if the ocean warms but the air above the ice sheets remains below freezing, the effect could be increased snowfall, net ice sheet growth, and thus lowering of sea level.”

This is another good call because recent research and data from the Grace Satellites do show that over all ice sheets and glaciers are melting but in a few areas, such as the internal of Antarctica and the Himalayas there is increased snowfall and ice build up.

But what of possible lowering of sea level? The paper gets it spot on again; “If the West Antarctic ice sheet melts on such a time scale, it will temporarily overwhelm any sea level change due to growth or decay of land-based ice sheets.”

Stunningly Hansen’s team states; “A 2°C global warming is exceeded in the 21st century in all the CO2 scenarios we considered, except no growth and coal phaseout.”

Over thirty years later, UN COPs discuss actions needed to try and keep temperature rise to under 2C, a temperature the paper suggests will cause 5C warming in Antarctica, but without much success so far and it seems that keeping future warming down to such a limit is becoming all but impossible and not without the end to massive coal burning.

There is nothing obviously incorrect in this paper.  All this was predicted using models that according to 'skeptics', are not supposed to work, over 30 years ago in 1981, the year IBM released it’s first PC with Microsoft MS DOS.

You have got to give this man and his team some credit for saying all this when most people thought we were still expecting an ice age. This is either good science or, if you reject AGW, they must have been very, very lucky. Personally I think I know why they were employed by NASA.

UPDATE
Coincidently in a post on April 2nd,  Real Climate have looked at one aspect of this paper and concluded that;


" a projection from 1981 for rising temperatures in a major science journal, at a time that the temperature rise was not yet obvious in the observations, has been found to agree well with the observations since then, underestimating the observed trend by about 30%, and easily beating naive predictions of no-change or a linear continuation of trends. It is also a nice example of a statement based on theory that could be falsified and up to now has withstood the test. The “global warming hypothesis” has been developed according to the principles of sound science."