Warmer In The Thirties - I think NOT

A regular commenter on the Orwellian named 'Real Science' is someone called suyts who has merited a mention on Really Sciency before for his ‘some pale shading’ and his warped logic achieving 'muppet' status. Well this guy has his own blog which reaches a whole new level of crazy.

Recently the 'syuts place' blog made a very specific claim - "Arctic Was Warmer In The Thirties!!". Yes the two exclaimation marks were his just to show how significant he wanted the claim to be considered. He even included graphs picked out from actual credible sourses to prove it;

The actual source for his graph is Warming Trends in the Arctic from Clear Sky Satellite Observations, JOSEFINO C. COMISO, from NASA Goddard Space Flight Center which appeared in Journal of Climate way back in 2003, via NASA's "Evidence of Arctic Warming" page.

It is true that the 'thick black line' shows that the temperature trend was higher in the thirties than it is by the end of the graph. However if you read the paper you find that Comiso and the research fully support the global warming theory - as does NASA. There is no doubt about this and the Abstract clearly states;


The longer-term in situ surface temperature data shows that the 20-yr trend is 8 times larger than the 100-yr trend suggesting a rapid acceleration in the warming that may be associated with the recent change in phase of the Arctic Oscillation that has been linked to increasing greenhouse gases in the atmosphere.

So basically suyts has cherry picked a graph, altered it a little and taking it out of context has added his own denial spin that is totally at odds from the actual published research - a typical tactic when no real research supports your beliefs.

But is there any evidence that the Arctic Was Warmer In The Thirties?

I commented on suyts post to make two specific points;

First, as another poster, uknowispeaksense, (whose rather good blog I have been following for a while), says: "So What?" Cherry picking one area to suggest something significant about Global temperatures is wrong on so many levels. It a tired old tactic. Find an area that might just be bucking the trend for now and highlight it. Then when challenged claim that you were never suggesting it related to anything else. Of course if this were true and the person was honest, this would have been stated from the outset - "This area was warmer in the past than it is today - even though most other areas have warmed more now". This sort of level of openness and honesty is rarely found in those who are desperate to find something to support their beliefs.

So simply put, even if suyts is correct in his statement that the "Arctic Was Warmer In The Thirties", (and he isn't as I will show), without a global context the statement is as significant as saying refrigerators were as warm in the thirties.

The second point I wanted to make is obvious to anyone with the slightest hint of real scepticism. The graph presented stops over a decade ago. I included a link showing more recent temperatures from NOAA's Arctic Report Card. This is from 2011;


It clearly shows that while the peak trend in thirties was high in 2000, where Comiso's data ends, that by 2003 the temperature trend exceeds any in the record. Natural variation still causes the temperature to drop below my line but the overall direction of the trend is clear and with 2012 so far the warmest recorded for the Northern Hemisphere I strongly suspect that trend is likely to continue.

So what response does someone get from suyts for highlighting more recent data that clearly shows that the Arctic was NOT warmer in the thirties?


"I thought it was you guys who put so much stock in “peer-review”."

I assume that this response is because the NOAA graph is from their report card and suyts graph is cherry picked and  misrepresented from research that is totally at odds from his beliefs.


"warmists, for some reason, don’t like this graph. They aren’t very explicit as to why"

Clearly Language comprehension isn’t his strong suit and the meaning of  “the graphs presented stop over a decade ago” was out side his range of understanding. I then asked him specifically “Do you accept that the recent temperature data for the area shows your headline to be false?” His direct answer was No. The graphed data demonstrably shows that he is wrong. His reasoning was bizarre;

Why would I have to show him wrong? It must be accepted from the data I presented that his headline clearly is wrong. Logic would state it is up to him to present evidence to the contrary, especially since he had presented no recent data to support his recent claim. A bit like stating flared trousers are the height of fashion and proving with a picture from the 1970s.


As for using the same data that was used in the Comiso paper, that data ended in 2000 but it was data approved by NASA just as the data used in the NOAA graph - except of course that data was more current.

There was of course a lot more rambling but none of it provided any support for the Warmer In The Thirties claim. Undeterred by his irrational nonsense I decided to spell out what would be acceptable evidence


"The NOAA document I have linked shows Arctic up to 2010 and clearly shows a peak about 0.7 kelvin above the 30s peak. By all means show ANY data from a recognised source covering the same area and time frame you prefer if you can find any actually showing the ‘Arctic Was Warmer In The Thirties’."

It was at this point that he started to believe he was Batman!


Wholly crap Laz! ...  What is implicit throughout the entire post and comments are that none of the present data sets show what was once shown. Notice how your NOAA offering butchers the data?

Ah, so that's it. A conspiracy, the data has been manipulated in nefariousness ways. I actually knew this was coming because in a previous comment I stated I was "not really interested in any conspiracy nonsense" he would concoct. The psychological problem with those that believe in conspiracy theories is that by necessity they do not think them a conspiracy. I'm not suggesting that he is wrong about data adjustments. They are necessary to reduce uncertainties as the science improves. The problem is that the conspiracy theorist will always believe that they have either been altered to prove them wrong or not altered, (in the case of not compensating enough for the heat island effect), to not prove them right.

But even looking at the two graphs he is still wrong. Below you will see the two graphs taken from the original sources one overlayed on top of the other. I have squashed and stretched the images as necessary to get both scales to align. The only other alteration I have done is to alter the contrast to highlight the trend over the variation on one graph and coloured the other graph red so that differences can be easily seen. The graphs track each other very well. There is no indication that the one showing recent data (red) has been manipulated in such a way as to make the past colder, as I suspect suyts is trying to insinuate, in fact the older graph in black could be a trend of the other.  If anyone doubts it do the exact same exercise and align up the scales. 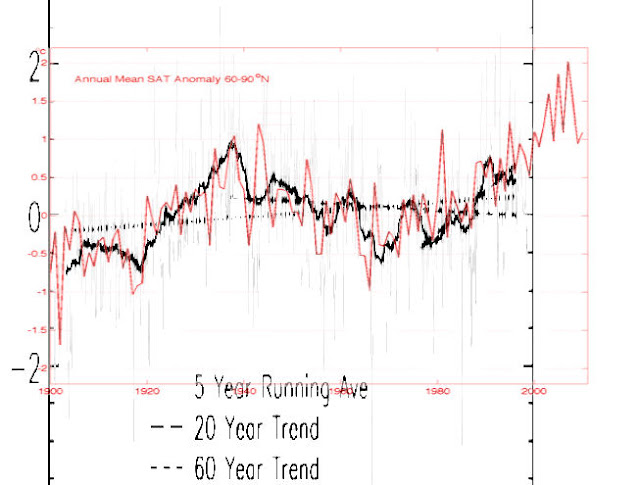 It is crystal clear from the data that the warming trend continues into the next decade, as it does in all recognised temperature data sets. Guess what? The Arctic Was NOT Warmer In The Thirties!

However I'm still certain that suyts will claim that the recent data is unreliable. But there is a simple point of logic here; If we chose to believe over reason that the data is unreliable, how can it be claimed that it was cooler than any previous time? 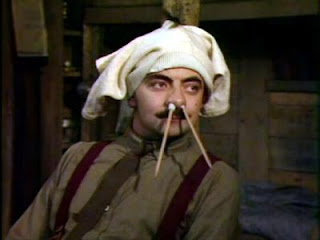