Suyts Fails To Touch Base

It seems that either my criticisms at suyts place or my last post pointing out that his claim about Arctic temperatures in the thirties compared to today used temperatures over a decade out of date embarrassed him enough to do a further post where he actually tried to get some current temps to compare the thirties with. He even dedicated the post to me! - Now there is someone who is easy to awe. He even got off to a good start by choosing UAH satellite data.

Unfortunately he made another totally embarrassing hash of his analysis. His commentators even congraulated and fawned over it and one even re-blogged it, so it doesn't bode well for their critical thinking skills. To be honest it was doomed from the start because suyts already had the answer he wanted so it didn't really matter what the data showed, he was always going to get the answer he needed.

The technique he chose involved 'splicing' the UHA data to the Cosimo graph mentioned in the last post. This is not necessarily a bad thing if done correctly but like so many AGW deniers he says it shouldn't be done. Adding data sets from different sources in appropriate in a Meta Analysis is common across all science disciplines. It is especially common in climatology, and the likes of Prof Mann has done it, so if deniers can convince themselves it shouldn't be done at all it allows them to dismiss at least some of the science showing how wrong their thinking is.

So suyts makes it clear that he doesn't like 'splicing'. In fact he makes the point several times but then does it anyway and uses his results as evidence he was right all along. That's right - he uses a technique he believes is invalid to get a result that proves his case and makes a post about it. The irony of the contradiction seems lost on his commentators but wouldn't be on anyone with the slightest sense of true skeptcism.

So by all rights this post should end here with another embarasment to suyts.

However 'splicing' is a valid thing to do so maybe even if suyts doesn't like it he still has made a valid point - if only: 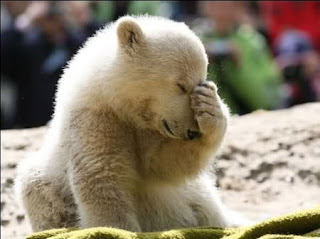 He first graphs the last decade of the UHA data set with a trend and a 60 month moving average and gets this; 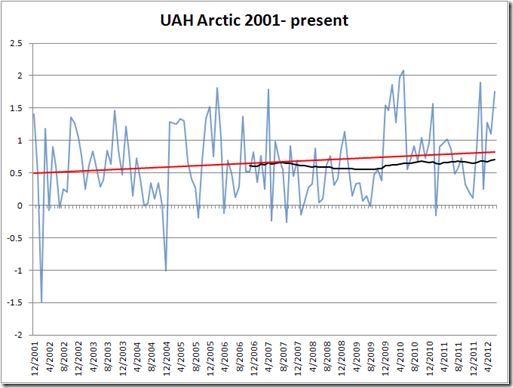 Then he sticks aligns 'the anomaly axis to match Cosimo’s' graph that he used in his first failed post and gets this; 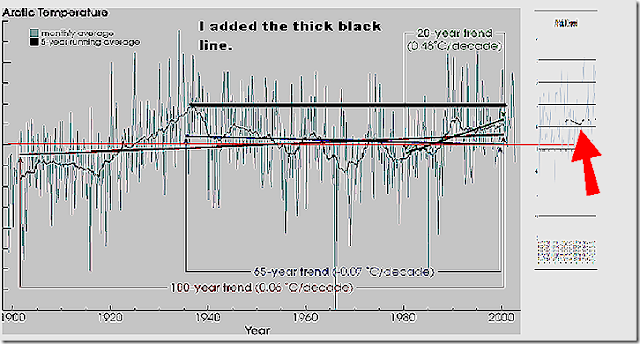 I suppose because the black smear, (highlighted by my red arrow), is below the 'thick black line' he added then he believes that the current 5 year average is below that of the 1930s and claims 'that the arctic, after adding the recent arctic temps, is still colder than what it was in the late 1930s'.

What suyts had done is not the same technique, even if he believes it is. You just can't take different data sets and align 'the anomaly axis' to zero. This shows such ignorance of the basics it is difficult to believe that he not only did it but his, (now apparently just as ignorant), commentators didn't call him out on it.

The Cosimo graph appears to use data with a 1961-1990 (HadCru) base line. The UHA satellite data has a 1979-1999 base line - this data set didn't start until the December 1978. Of course the 5 year trend of the UHA is going to be below! The only way to do the 'splicing' properly is to average the same time period for all data sets used - something I'm not prepared to spend time on as there is plenty of current research showing recent Arctic temperatures are unprecedented in several centuries. But I thought I would do a rough calculation on the differences in the base lines and reapply suyts technique to see what he would have got if he had knowing anything about science.

I then plotted the same UHA decade that suyts used in his post to ensure we were both using the same data set in the same way and got this; 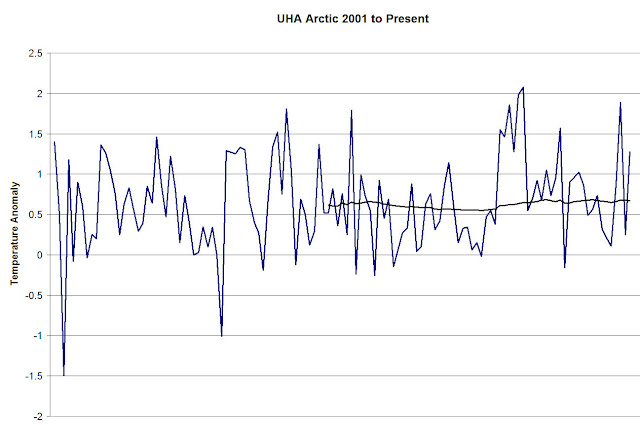 The graph looked the same so I rescaled it with the offset and added it to the original Cosimo graph and ended up with this: 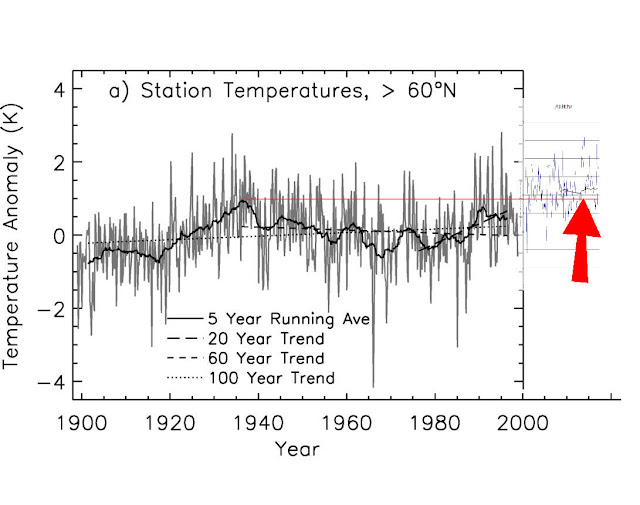 As you can see the trend is well above the 1930s level. I know this technique is not very accurate in either calculating the offset nor the alignment so just to check that it wasn't a totally inaccurate depiction I looked for a graph showing past to current Arctic temperature trends and found this from the Alaska Satellite Facility;

It has an 11 year rather than a 5 avg year but it still clearly shows the peak in the 1930s and it even more clearly shows it was not as warm as current temperatures.

So how did suyts do?

Other than using a technique that he believes wont give a valid answer, and displaying little knowledge of some very basic scientific methods, and being totally ignorant of the concept of data sets having a different zero base line for anomalies the boy did rather well! It remains to be seen if he has the honesty and maturity to correct his rather obvious mistakes and perhaps even apologise for misleading his very gullible readers, but based on his example so far and  this latest nonsense  it doesn't bode well so I'm not going to be holding my breath - however time will tell.
by Lazarus